One Man's Trash is Another Man's Treasure 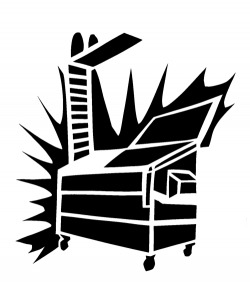 Welcome to the SAVE RENO DUMPSTER DIVING information site. The intent of this project aims to keep laws regarding Dumpster Diving in Reno off the books.

The Reno City Council (according to a December 1st, 2008 front page story, Reno neighbors ask for law against trash can-diving,  in the Reno Gazette Journal) will convene hearings regarding the issue of Dumpster Diving in the Reno area. There seem to be some mouthy opponents to this basic freedom in our community. This site is being created to advocate the practice of Dumpster Diving in the Reno area and inform the public and city authorities about this benign activity.

This proposed action--Ordinance to Restrict Scavenging of Garbage--targets some of the most downtrodden and voiceless individuals of our city: the homeless, the unemployed, the laid-off.

Not to mention, it attacks the activities of Food Not Bombs, hobby curb crawlers, Freegans, trash bin divers, found object artists, dumpster divers, gleaners, recyclers, urban hunter gatherers and anyone who has ever retrieved perfectly good items from the trash, dumpster, curb or dump.

The Mission of Save Reno Dumpster Diving is:

To galvanize public support and understanding of trash scavenging, dumpster diving, curb crawling and other forms of recycling. Its ultimate goal is to defeat any attempts to outlaw these activities in the Reno area.

The Save Reno Dumpster Diving site and blog is updated periodically with the most current information and weblinks regarding dumpster diving, scavenging, and the City of Reno's attempts to ban these activities. Stay-tuned by checking in with the blog, where we'll keep you informed of the progress of this awareness campaign, the debate in City Hall, the Reno community and the media.

Dumpster Wars: Reno's Trash Politics showcases the activities of Save Reno Dumpster Diving, an activist response to a proposed Ordinance to Restrict Scavenging of Garbage in Reno, NV.

Conceptually, the film is a guerrilla act. Every local television news station in Reno and the Reno City Council itself produced the footage. When the multiple sources of footage are pieced together a new story emerges. The new story reveals an absurd reality set in motion by Save Reno Dumpster Diving—the Reno City Council gets serious about talking trash.